SnowCap does not have funding to help with energy bills at this time. 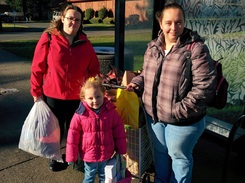 How often can I come to SnowCap?
In response to COVID-19 we have  added extra visits. You are welcome to come to SnowCap up to two (2) times a month through August, 2020.  After August you may come once per month. Should you have any questions, please feel free to call our office at (503) 674 -8785.

Can I get help with diapers and formula?       Yes.
We have formula available for babies 12 months and younger.  Diapers are currently available in the baby's first two years of life.

What do I need to bring to get assistance? If you are housed, please bring proof of address (POA) If you are unhoused, this is not required (mail addressed to you within the last 30 days).  We do not request or require ID.

Can you help with prescriptions?     Sometimes.
We have a very limited budget for prescriptions.  Call our office for more information at (503) 674-8785.

Can you help me with utilities?      Not at present.
Limited funding is available during some months of the year, and this page will be updated when it becomes available again.

I am looking for work, can you help with professional clothes (or any adult clothes)? Clothing is currently unavailable due to
​COVID-19.

Copyright © 2020
In accordance with federal law and US Department of Agriculture Policy, this institution is prohibited from discriminating on the basis of race, color, national origin, sex, age or disability.
​ SnowCap  is an equal opportunity provider.
Donor Privacy:
​SnowCap will not sell, share or trade our donors’ names or personal information with any other entity, nor send mailings to our donors on behalf of other organizations.  This policy applies to all information received by SnowCap, both online and off line, on any platform (this refers to the website or any mobile applications that may be developed), as well as any electronic, written or oral communications. To the extent any donations are processed through a third-party service provider, our donors’ information will only be used for purposes necessary to process the donation.