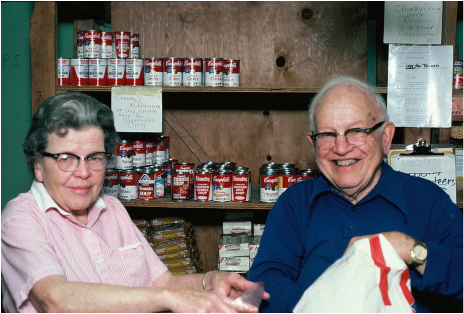 In 2017 SnowCap celebrated 50 years of service to our neighbors and Kirsten Wageman became Executive Director with the retirement of Judy Alley.  With a volunteer corp of 1,000 dedicated folks giving their time, SnowCap served over 10,000 neighbors each month!

2020 brought the COVID-19 pandemic and many challenges. SnowCap is proud that while the ways we serve our neighbors in need has changed a bit, we remained open for regularly scheduled services and even doubled the amount of food assistance offered to our clients.

2022 brings the next chapter of our history as we undertake the Campaign for SnowCap's Future to build a second facility to relocate our clothing program, add warehouse space and a place for connection, community and compassion.

Copyright © 2022
In accordance with federal law and US Department of Agriculture Policy, this institution is prohibited from discriminating on the basis of race, color, national origin, sex, age or disability.
​ SnowCap  is an equal opportunity provider.
Donor Privacy:
​SnowCap will not sell, share or trade our donors’ names or personal information with any other entity, nor send mailings to our donors on behalf of other organizations.  This policy applies to all information received by SnowCap, both online and off line, on any platform (this refers to the website or any mobile applications that may be developed), as well as any electronic, written or oral communications. To the extent any donations are processed through a third-party service provider, our donors’ information will only be used for purposes necessary to process the donation.